The Rutherford Institute came to the defense of a 45-year-old African-American man who was arrested for standing silently in front of the U.S. Supreme Court building while wearing a sign expressing his concerns about police abuse and the government’s disparate treatment of African-Americans and Hispanics. 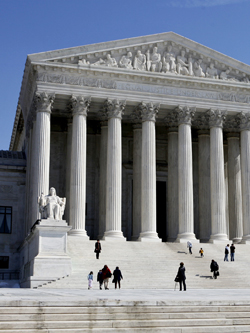 On August 28, 2015, in a blow to First Amendment rights, the U.S. Court of Appeals for the District of Columbia upheld as “reasonable” a 60-year old federal statute criminalizing expressive First Amendment activity on the Supreme Court plaza. The appeals court’s ruling reversed a lower court decision in Hodge v. Talkin, et al., that found the ban to be “repugnant” to the Constitution and “unreasonable, substantially overbroad, and irreconcilable with the First Amendment.”

The ruling arose in response to a lawsuit filed by attorneys for The Rutherford Institute on behalf of activist Harold Hodge, who was arrested while standing silently in front of the U.S. Supreme Court on a snowy day wearing a sign voicing his concerns about the government’s disparate treatment of African-Americans and Hispanics.

“If citizens cannot stand out in the open and voice their disapproval of their government, its representatives and its policies without fearing prosecution, then the First Amendment is little more than window-dressing on a store window—pretty to look at but serving little real purpose,” said constitutional attorney John W. Whitehead, president of The Rutherford Institute and author of Battlefield America: The War on the American People. “Through a series of carefully crafted legislative steps and politically expedient court rulings, government officials have managed to disembowel this fundamental freedom, rendering it with little more meaning than the right to file a lawsuit against government officials. The First Amendment has, for all intents and purposes, become an exercise in futility.”

On January 28, 2011, Harold Hodge quietly and peacefully stood in the plaza area near the steps leading to the United States Supreme Court Building, wearing a 3’ X 2’ sign around his neck that proclaimed: “The U.S. Gov. Allows Police To Illegally Murder And Brutalize African Americans And Hispanic People.” The plaza is a place where the public is allowed to gather and converse, and is in all relevant respects like a public square or park where citizens have traditionally met to express their views on matters of public interest. However, Hodge was handcuffed, placed under arrest, and then transported to U.S. Capitol Police Headquarters for violating 40 U.S.C. § 6135, which broadly makes it unlawful to display any flag, banner, or device designed to bring into public notice a party, organization, or movement while on the grounds of the U.S. Supreme Court, thereby banning expressive activity on the Supreme Court plaza. Institute attorneys subsequently filed a lawsuit challenging § 6135, and in June 2013 a district court judge struck down the law finding it “plainly unconstitutional on its face.”

In response, the government not only appealed that ruling, but the marshal for the Supreme Court—with the approval of Chief Justice John Roberts—issued even more strident regulations outlawing expressive activity on the grounds of the high court, including the plaza. Rutherford Institute attorneys have since filed a related lawsuit challenging the Supreme Court’s more strident regulations. As Whitehead points out, “Ironically, it will be the justices of the U.S. Supreme Court who will eventually be asked to decide the constitutionality of their own statute in this case, yet they have already made their views on the subject quite clear.”

The Rutherford Institute's petition for a writ of certiorari in Hodge v. Talkin

Opinion of the U.S. Court of Appeals in Hodge v. Talkin