The Rutherford Institute came to the defense of a San Antonio high school student who was told that she must wear a name badge containing a Radio Frequency Identification (RFID) chip as part of her school district's new “Student Locator Project.” 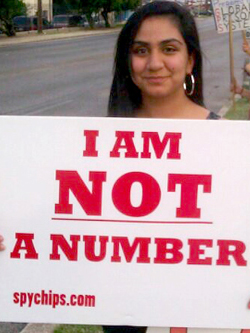 So small that they are barely detectable to the human eye, RFID tags produce a radio signal by which the wearer’s precise movements can be constantly monitored, raising serious privacy concerns. For Andrea Hernandez, a sophomore at Jay High School, the badges posed a significant religious freedom concern.

The Northside Independent School District in San Antonio, Texas, launched the “Student Locator Project” ostensibly in order to increase public funding for the district by increasing student attendance rates. As part of the pilot program, roughly 4,200 students at Jay High School and Jones Middle School were required to carry Smart ID cards embedded with an RFID tracking chip. Hernandez, a Christian, expressed her sincere religious objections to being forced to participate in the RFID program, but was told by school officials that “there will be consequences for refusal to wear an ID card.” In response to her public objections, school officials offered to quietly remove the tracking chip from Andrea’s card if the sophomore would agree to wear the new ID without the imbedded RFID chip so as to give the appearance of participation in the Student Locator Project. Hernandez refused the offer.

In coming to Hernandez’s defense, Rutherford attorneys filed a petition for a temporary restraining order and immediate injunctive and declaratory relief alleging that the school’s actions violate Andrea’s rights under Texas’ Religious Freedom Act and the First and Fourteenth Amendments to the United States Constitution. After a drawn-out battle waged in court and within the community, school officials with the Northside Independent School District announced their decision to stop using the tracking program. According to school officials, the decision to cease the “Student Locator Project” was due in part to low participation rates, negative publicity, and a lawsuit by The Rutherford Institute.