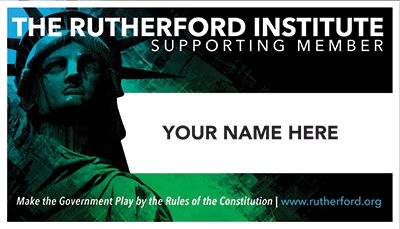 It’s our job to make the government play by the rules of the Constitution, and it’s a job we take very seriously.

There are 319 million of us in this country.

Imagine what we could accomplish if we actually worked together, presented a united front, and spoke with one voice.

Your supporting membership makes it possible for The Rutherford Institute to:

You'll also receive a host of benefits, ranging from new publications to news alerts and other valuable Rutherford Institute resources and bulletins. Most of all, you'll have the satisfaction of knowing that your donations are helping us advance the cause of freedom.

Thanks for standing with us on the front lines of the fight for freedom!