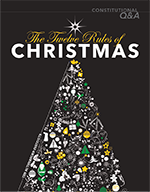 The Christmas season is unquestionably the most festive time of the year for Americans, celebrated across the nation by persons of all walks of life and political beliefs.  Even those without strong religious beliefs join in the festivities of a season dedicated to sharing, helping the less fortunate and striving for peace in the world.

However, the goodwill of the Christmas season has been squelched in many public schools, where uninformed administrators are turned into Grinches by misguided  fears  that the law requires anything religious be banned from public schools. Over the years, The Rutherford Institute has been contacted by parents and teachers alike concerned about schools changing their Christmas concerts to “winter holiday programs” and renaming Christmas “winter festival” or cancelling holiday celebrations altogether to avoid offending those who do not celebrate the various holidays.

Examples of the purging of Christmas from our schools abound:[2]

Students asked to send seasonal cards to military troops have been told to make them “holiday cards” and instructed not to use the words “Merry Christmas” on their cards. Similarly, Christmas trees, wreaths, candy canes and even the colors red and green have been banned as part of the effort to avoid any reference to Christmas, Christ or God.

Q:  May public school students speak about Christmas at school?

A:  Public school students’ written or spoken personal expressions concerning the religious significance of Christmas (e.g., T-shirts with the slogan, “Jesus Is the Reason for the Season”) may not be censored by school officials absent evidence that the speech would cause a substantial disruption of the orderly operation of the school.[5]

Q:  Are public school teachers forbidden from celebrating the holiday at work?

Q:  May students be taught about Christmas?

A:  Public schools may teach students about the Christmas holiday, including its religious significance, so long as it is taught objectively for secular purposes such as its historical or cultural importance, and not for the purpose of promoting Christianity.[7]

A:  Public school teachers may send Christmas cards and gifts to the families of their students so long as they do so on their own time, outside of school hours.[8]

A:  Public schools may include Christmas music, including those with religious themes, in their choral programs if the songs are included for a secular purpose such as their musical quality or cultural value or if the songs are part of an overall performance including other holiday songs relating to Chanukah, Kwanzaa, or other similar holidays.[9]

Q:  What if a student does not believe in or celebrate Christmas?

A:  Public schools may not require students to sing Christmas songs whose messages conflict with the students’ own religious or nonreligious beliefs.[10]

Q:  May students give out Christmas cards at school?

A:  Public school students may not be prohibited from distributing literature to fellow students concerning the Christmas holiday or invitations to church Christmas events on the same terms that they would be allowed to distribute other literature that is not related to schoolwork.[11]

Q:  Are people allowed to put up Christmas displays in parks?

A:  Private citizens or groups may display crèches or other Christmas symbols in public parks subject to the same reasonable time, place, and manner restrictions that would apply to other similar displays.[12]

Q:  Is a city or town prohibited from sponsoring a holiday display?

A:  Government entities may erect and maintain celebrations of the Christmas holiday, such as Christmas trees and Christmas light displays, and may include crèches in their displays at least so long as the purpose for including the crèche is not to promote its religious content and it is placed in context with other symbols of the Holiday season as part of an effort to celebrate the public Christmas holiday through its traditional symbols.[13]

Q:  Can my employer prohibit me from celebrating Christmas while on the job?

A:  Neither public nor private employers may prevent employees from decorating their offices for Christmas, playing Christmas music, or wearing clothing related to Christmas merely because of their religious content so long as these activities are not used to harass or intimidate other employees.[14]

Q:  Can my employer require me to work on Christmas?

A:  Public or private employees whose sincerely held religious beliefs require that they not work on Christmas must be reasonably accommodated by their employers unless granting the accommodation would impose an undue hardship on the employer.[15]

Q:  If the Constitution requires a “separation of church and state,” why is Christmas a national holiday?

A:  Courts have routinely held that government recognition of Christmas as a public holiday and granting government employees a paid holiday for Christmas does not violate the Establishment Clause of the First Amendment. The government has a valid secular interest in providing a day of rest to citizens and may accommodate the religious beliefs of citizens in doing so.[16]

Should you have further questions or need legal assistance in exercising your constitutional rights, please contact the Legal Department at legal@rutherford.org.

[1] The Rutherford Institute, a nonprofit civil liberties organization based in Charlottesville, Va., is deeply committed to protecting the constitutional freedoms of every American and the integral human rights of all people through its extensive legal and educational programs. The Institute provides its legal services at no charge to those whose constitutional and human rights have been threatened or violated. The Institute’s mission is twofold: to provide legal services in the defense of civil liberties and to educate the public on important issues affecting their constitutional freedoms.