Book Review: The Divine Expedition: Where are You in the Book of Romans? 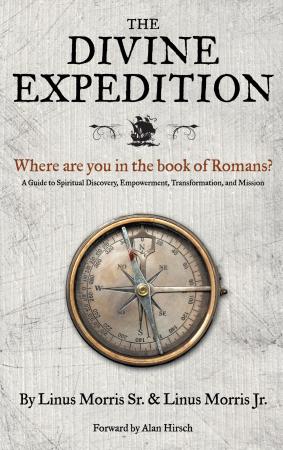 John W. Whitehead, an old friend of the Morris family, asked me to read The Divine Expedition: Where are You in the Book of Romans? and I have to admit I initially did not know what to expect. I have spent my whole life in the Episcopal/Anglican Church but I have never been one to read Christian-themed books. To me they have always seemed like over-extended versions of the weekly sermon and fail to captivate me like other books so often do. The Morrises’ book, however, had the completely opposite effect. Like its title, The Divine Expedition is an enthralling adventure of what it means to live the Christian life through the lens of Paul’s letter to the Romans. What makes this composition different than the countless other Christian books on the market is that it compares the Bible’s spiritual journey to some of the most famous secular expeditions in history. Whether it is Sir Edmund Hillary’s ascent of Mt. Everest, Ferdinand Magellan’s circumnavigation of the globe, or Apollo 13’s dangerous escape from the Moon, Morris Senior and Junior weave many adventures into a fantastic account of the journey to God. Though the Christian journey may not always be as exciting and dangerous as Shackleton’s escape from Antarctica or Captain Cook’s exploration of the Pacific, the authors make it clear that the end-result of this adventure can be the most rewarding of all.

At the beginning of the book the Morrises advise the reader to “take a spin” around the book of Romans to familiarize oneself with the letter before reading. As a reader who has studied Paul’s letter to the Romans in college courses but has not done so for a few years, I believe that any level of familiarity with Romans is sufficient to begin this expedition. The book often alludes to the themes of the chapters of Romans but never expects the reader to remember specific verses or ideas, so to those new to Paul’s letters: be not afraid. The authors do make it immediately clear, however, that the journey to God will not be easy.  The very first page rebukes the idea that the Divine Expedition will be like a cruise that, “soothes and pampers us.” The Divine Expedition is like any of the great journeys in that it will include much hardship, taking “us into the unknown and pushing us beyond our comfort.” While it may be difficult at times, the authors assert that we will not have to undertake it alone; they along with all other Christians are with us in a deep and sacred camaraderie. While reading through the pages I not only felt the companionship of the Morrises, but also the presence of Jesus, guiding me every step of the way.

The best aspect of The Divine Expedition for me was its lack of any form of “preachy” tone. Morris Senior and Junior do not write as if they have journeyed flawlessly through the Christian life; many times throughout the book they confess their own errors and the hardships they encountered while trekking toward Christ. In fact several extremely personal memories are used to enforce the messages they propound. In one chapter Morris Sr. tells the story of how he became an atheist in his college days, using reason and logic in an attempt to dispel any notion of God. An example of this philosophical thought he mentions in the book is, “if God could do anything and God could make anything, why couldn’t He make a rock so heavy that He couldn’t lift it?” Morris admits that he used this arrogant and reductionist argument to create a “lose-lose” situation with God. This story was used to show how a person could put themselves at the center of the Universe and pretend that they could understand God better than He does. Just a few pages later Morris Sr. again shares another intimate story about a friend who had become an alcoholic and blamed everyone but himself for his predicament. During a conversation they had, Morris’ friend remarks, “Sometimes I would like to ask God why he allows poverty, suffering, and injustice when He could do something about it.” “Well, why don’t you ask Him?” Morris replies. “Because I’m afraid He would ask me the same thing.” This memory deeply moved me and showed me a new approach to suffering and injustice in the world that I had not conceived of before. The authors share personal stories to show that neither they nor their lives are perfect, for the betterment of the reader and the message.

The book is very well organized and easy to follow as each chapter corresponds to a chapter in the book of Romans. Each chapter immediately grabs your attention with three or four quotes either from the accounts of famous adventurers or those who have written about them. These secular quotations are then followed with a passage directly from the Book of Romans that pulls them all together and sets the overall theme for the chapter.  Each of the book’s sections maintains the interest of the reader by varying subject matter between scripture, stories of historical expeditions, and personal thoughts and opinions. While there is a multiplicity of thoughts and stories, the book does not become confusing because of the authors’ well planned messages that are introduced at the onset of each chapter and reinforced at the end. These chapters become microcosms of the structure of the entire book which is extremely well-organized; each chapter builds upon the previous ones and “missional markers” are utilized throughout to create a continuous learning journey through the Scripture. Before reading I personally wondered how the Morrises could come up with intriguing themes and messages for each and every chapter of the Scripture, but they fulfilled my challenge completely.

The greatest lasting impression of this book to most readers will definitely be the metaphors. The reader can easily imagine the great explorers on their journeys but sometimes it is hard to picture what the Divine Expedition looks like. These situations are when the imagery of the Morrises is most useful. Probably my favorite metaphor in the entire book is that of a person hesitant to accept God standing on a diving board. They are not sure if God truly loves them and “jumping” into the unknown frightens them. Leaping into unknown waters alone can be daunting but luckily we have Jesus to show us the way. He is the physical emanation of God’s love and will “take the plunge” before us so that we can jump without fear. Throughout the book the authors show us through imagery and metaphors that the Divine Expedition is not so intimidating with Jesus at our side.

One of my few criticisms of the book is its tendency to sometimes draw too large of conclusions from the famous expeditions it cites. The overall usage of Earthly journeys to create the theme of the work is successful but there are a few times in which I think the authors were grasping for a higher message when there was not one to be found. This does not really become a problem for the reader, however, because even if a famous adventure does not have a concrete message, it serves to make the book more exciting and hard to put down. Furthermore these times when I feel the authors are trying too hard to create a message out of a famous story are easily offset by some of the intriguing thoughts they come up with independently. For example, they write that one of the great futilities of life is Morality. At first glance this does not make much sense but the authors explain themselves extremely well. The Morrises assert that morality is futile because worrying about Earthly deeds distracts us from loving God with all of our heart and continually asking, “How good is good enough?” clouds the grace God gives to us freely. Good deeds are not what elevate us to Heaven; it is true and unimpaired love of God. One final criticism I have with the book is its sometimes negative attitude towards those of other religions. Sometimes other religions, especially Judaism, are singled out as examples of getting lost in the Divine Expedition while I believe they are simply diversions from the ultimate path. I think a slightly more tolerant approach to other faiths would be better suited for a book of this genre.

Overall this is a wonderful book that keeps the reader interested throughout and teaches them some very important lessons along the way. While I would not call it a good resource for one attempting to study the Book of Romans on its own, it is a good companion in that it draws out some of the most important points of the Scripture in a fun and interesting way. I would give this book 8.5 out of 10 and would recommend it to any Christian who wants to learn more about the spiritual adventure they are on.

The best piece of advice I can give to anyone reading this book is to take your time and read it slowly. It is easy to finish a chapter and then immediately jump to the next in eagerness to continue the ascent of Mt. Everest or resume the trip down Brazil’s River of Doubt, but that is not how the story is meant to be read. Read a chapter or two, take a break, and let the messages of Paul sink in. Everest was not climbed in a day and this book cannot be truly appreciated in a few hours.