BOOK REVIEW: The Emergency State: America's Pursuit of Absolute Security at All Costs

“For seven decades we have been yielding our most basic liberties to a secretive, unaccountable emergency state – a vast but increasingly misdirected complex of national security institutions, reflexes, and beliefs that so define our present world that we forget that there was ever a different America. ... The secure, prosperous, individualistic American democracy that won World War II has become a country anxious about the world, fearful of its economic future, and inattentive to the erosion of its constitutional principles. Life, liberty, and the pursuit of happiness have given way to permanent crisis management: to policing the planet and fighting preventative wars of ideological containment, usually on terrain chosen by, and favorable to, our enemies. Limited government and constitutional accountability have been shouldered aside by the kind of imperial presidency our constitutional system was explicitly designed to prevent. ... [This] has made us ... less free ... and diminished our understanding of what it means to be an American” (1-3)

Have you ever wondered how our “addiction to fear” (286) created the imperial presidency, cost us our constitutional freedoms (such as privacy), and made us abandon the checks and balances which the careful Framers of the American Constitution put together to preserve liberty over tyranny? If so, David Unger with this book has connected the dots for you in an important and thought provoking domestic and foreign policy survey of how we became a nation today that many cannot recognize. 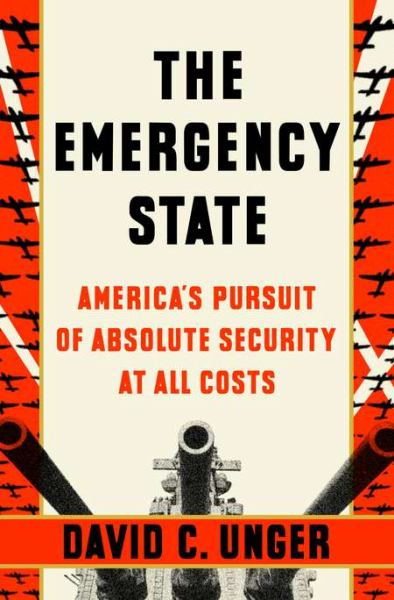 As an establishment insider, this author is a long time member of the Council on Foreign Relations and the Editorial Board of the New York Times and also an adjunct university professor. But here he has written a radical book advocating the almost impossible task of revitalizing American democracy by: (1) restoring the traditional checks and balances found at the foundation of our tripartite government structure consisting of the Congress, Judiciary and Executive, which means diminishing the imperial presidency, (2) dismantling an obsolete cold war national security apparatus which consists of the C.I.A., Pentagon and the White House National Security Council, and (3) reexamining and replacing “long-held assumptions about the kinds of policies needed to keep Americans secure and prosperous.” (18)

As the basis for his thesis that the endless state of war and policing the planet in which we find ourselves has eviscerated our democracy and liberties, the author points out that James Madison and the founders of our constitutional framework sought to prevent the corruption and tyranny that was the downfall of Republican Rome and the Italian city-states. From his study of history, Madison understood that the single gravest threat to American liberty “would be a lapse into the endless cycle of wars and rivalries for global dominance that plagued eighteenth-century Europe,” accompanied by crushing taxes, national debt, aggrandizing executive power and the encroachment on civil liberties. (20) Does this description sound familiar today and was it prophetic back then?

To establish that we have arrived at the condition which Madison feared, Mr. Unger then surveys recent American history and all its presidents, from Franklin Roosevelt to the present. This is done through an engaging and easily understood historical narrative which addresses foreign policy, the economy and civil liberties. The tale begins by illustrating that Woodrow Wilson was the midwife of our present day Emergency State with his entry into World War I after making a false promise to keep America out of the war. To this he added the machinery of his notorious Palmer Raids on suspected radicals from 1919-21. Then we learn that Franklin Roosevelt was the godfather of all the problems which the author identifies in the present day United States. He and Wilson set the precedents which their successors followed and expanded into ever increasing executive power, from Harry Truman to Barack Obama, with the exception of Jimmy Carter.

The following illustrates his analysis from presidents Roosevelt through Richard Nixon. For example, we learn that it was Roosevelt, and earlier Wilson, who instituted the fine art of spying on citizens for political reasons, and who used to that end J. Edgar Hoover and the F.B.I. (38-45) So the National Security Agency with its present day monitoring of all of our communications is simply following precedents put in place decades ago. Roosevelt also created the permanent military-industrial complex about which President Dwight Eisenhower sounded the alarm. (45-49)

President Harry Truman next comes in for nuanced criticism for moving Roosevelt’s wartime emergency state into the realm of a permanent peacetime emergency state, with “no logical termination, no moment when the emergency clearly ends and normal constitutional procedures come back into force.” (51) When the cold war ended 44 years later, we see that president George H.W. Bush, and his successors, instead of dismantling the emergency state and enjoying a peace dividend, preserved it intact and committed it to policing rogue states and terrorists, enemies hardly comparable to the world wide threat of international Soviet communism. (220-23)

The author believes that using Wilsonian rhetoric, Truman with his policy of universal containment hoodwinked the general public into believing that the welfare of the nation was crucially linked with the outcome of any local leftist, anti-colonialist or nationalist dispute. Tragically, this “evades necessary democratic debate about national security issues, leading to unwise policy choices followed by crippling public backlashes when the rhetorical exaggerations wear off and the overlooked reality forces itself painfully into view.” (74)

President Dwight Eisenhower, a Republican, then accepted as a bipartisan fixture in American life the institutions bequeathed him by Roosevelt and Truman and used them to overthrow leftist or neutralist third-world governments. In the author’s opinion he missed the opportunity to question outdated cold war assumptions on Communism, neutralism and the need for universal containment as an overriding governmental policy. (98-99). President John Kennedy in retrospect next is seen to have needlessly taken the world to the brink of nuclear extinction partly out of an excess of zeal for Truman’s universal containment. Kennedy also refused to understand at the beginning of the Cuban Missile Crisis of 1962 that the placement of missiles off of Florida really did not enhance any Soviet strategic advantage in the event of a nuclear attack. In the opinion of Mr. Unger, if attacked by missiles launched from Cuba the U.S. ability to retaliate massively against the Soviets would not have been diminished. (102-118)

Next Lyndon Johnson is accurately portrayed as being a natural acolyte of the emergency state due to his lust for power. (127) He also closely followed in the steps of FDR in misusing the FBI for political purposes, and easily dwarfed its misuse by Truman and Kennedy. As had Wilson with the entry into World War I and Roosevelt with the entry to World War II, Johnson plainly lied to the American people in the election of 1964 about his clear intention to wage a major universal containment war against Communism in Vietnam, which he then catastrophically mishandled. (122-26, 131)

Last, Richard Nixon then is presented as trying to rescue and rebuild the emergency state from its excesses which caused the public backlash against Johnson and his war in Southeast Asia. By ending the military draft and substituting a permanent all-volunteer army, Nixon is seen as having removed a key check on unwarranted and undeclared wars by the executive and having encouraged the growth of an unhealthy distinctive military culture in society which the framers would have disapproved. (134)  But, with his opening up relations with Communist China, Nixon is congratulated for the substantial accomplishment of having broken out of the unattainable goal of universal containment of communism and for the substitution instead of a triangular relationship with the U.S., China and Russia. (139-42)  However, his clumsy misuse of the White House, the CIA and the FBI for domestic political purposes led to his forced resignation and left the emergency state “exposed and discredited before the American people.” (146)

The presidencies of Gerald Ford through Barack Obama receive similar scrutiny, with Jimmy Carter being the only president who made an attempt to roll back the peacetime emergency state and change the course of American history. But Carter failed.

The only weakness in this study is in its concluding prescriptions for reform. This is probably due to the fact that the situation is really hopeless and has no solution. While the world today is actually safer than it was during the 44 year US‑Soviet cold war, no one acknowledges that fact. Deadly threats today are less existential and more manageable, in the authors words. (286) In plain language, this means that the entire world does not run the risk of a nuclear Armageddon akin to that which it faced in the 1962 Cuban missile crisis. But still the emergency state continues on and both political parties and all their presidents subscribe to it.

So, after acknowledging this, the author is left with advocating that the people at the grass roots must rise up and restore their institutions to their proper order. (296) And who knows, after the people reform the Congress and tame the presidency, "eventually" (302) the Supreme Court might even go along with making the president follow the rule of law.

While hope does spring eternal, the possibility of change in our governmental structures is not encouraging. A reform of governmental structures will not cure our addiction to fear because at bottom a more serious cultural sickness undergirds the failures of our governmental and political system. But this does not detract from the value of this historical analysis of the causes of the loss of our liberties today and our rejection of the Framer’s vision of America. Unfortunately, our addiction to fear and the desire for ever increasing power on the part of our leaders appears to have made our political condition terminal.