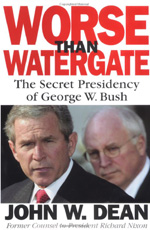 Joining the growing line-up of "Bush Bashing Books" on the best-seller lists, which now include Bob Woodward’s Plan of Attack, Richard Clarke’s Against All Enemies, Craig Unger’s House of Bush, House of Saud, and Kevin Phillip’s American Dynasty, is the one with perhaps the most direct and damning title: John Dean’s Worse than Watergate. As far as trends in book publishing go, it couldn’t look much worse for the Bush Administration. So much popular literature so critical of a sitting President’s transgressions or revealing of his hidden agendas (and written by respected authors largely beyond reproach) would seem to signal a tragic Nixonian end. If it weren’t for the fact that most Americans don’t read books and that politics has become a reality TV show that most Americans are content to sit back and watch, there just might be something for Bush and Cheney to worry about. Alas, we live in an alternate reality since 9/11, where books indicting our leaders appear before actual indictments; where reasons for going to war are debated after we’ve gone to war because the reasons we originally debated are no longer reasons; a world where absence of evidence is not evidence of absence; where missions are declared accomplished when they have just begun; where so many questions go merrily unasked and unanswered; and where the truth is a drifter down on his luck who’s beginning to doubt he’ll ever come out in the end.

Into this morass steps John Dean, whose authority to discuss the ill effects of secrecy in government few would question. As the former council to the President in the Nixon Administration, Dean was at the red-hot center of the Watergate scandal, serving as a principal witness in the hearings that led to Nixon’s historic resignation and doing time in jail for his involvement. Dean famously warned Nixon that the lies and cover-ups surrounding the Watergate break-in were forming a "cancer on the Presidency." Of course, when Dean went public with this information, the Nixon White House turned on him and called him a liar. But when the Nixon tapes were released, Dean was caught telling the truth.

Now, over thirty years later, Dean-the-political-pundit has gone public with another warning; this time to the Bush Administration. However, in Worse than Watergate, Dean writes with such urgency and indignation about the Bush-Cheney Administration’s abuse of power—and how they have deliberately chosen secrecy as a political tool and ignored the lessons of Watergate—that it becomes much more than a simple alert. As Dean himself says about the process of writing the book:

No longer was I writing a warning, but rather an indictment, for I could not write and publish fast enough to get in front of the abuses of power and the emerging ends-justify-the-means mentality, and even if I could have, it would not have made any difference, for they understood exactly what they were doing and why…. I’ve been watching all the elements fall into place for two possible political catastrophes, one that will take the air out of the Bush-Cheney balloon and the other, far more disquieting, will take the air out of democracy.

What follows is a detailed summary and analysis of Bush-Cheney shenanigans (most of which will be familiar to anyone who has had the time or inclination to follow them closely) seen through the eyes of a man clearly haunted by his involvement in Watergate and personally offended by the Administration’s use of secrecy and stonewalling. Strong statements like the one above appear frequently in Worse than Watergate, giving the reader the impression that Dean just can’t believe how the Bush-Cheney Administration has gotten away with so much. "Because of Watergate," Dean says, "no president has been so foolhardy as to openly initiate a program like Nixon’s to screw those who he or his top aides are unhappy with and to blatantly help friends—that is, until the Bush II Administration."

In dozens of short sub-chapters with titles like Bush’s Hidden Background, Cheney’s Health Secrets, The Cheney/Wolfowitz World Dominance Philosophy, Deceiving Congress—An Impeachable Offense, and The Evils of Excessive Secrecy, Dean holds forth like a prosecutor listing the evidence against a defendant in his closing arguments to the jury, never straying too far from his thesis (the Bush-Cheney White House is obsessed with secrecy, secrecy is bad and leads to your undoing; I should know), never offering too deep an analysis, just piling on the incriminating evidence and making direct, emotional appeals. For example, after detailing the controversy surrounding Cheney’s involvement with Halliburton, Dean says flatly, "What does Cheney have to say about all this? Nothing. To paraphrase Nixon, Cheney doesn’t give a s***, so he’s just going to keep on stonewalling."

While it might be true that the Bush Administration has exercised its power in ways the Nixon White House only dreamed of, it’s also true that the Bush Administration has been the first to admit it, albeit indirectly. The U.S. Supreme Court case surrounding Cheney’s Energy Task Force is before the High Court because Cheney and his lawyers have argued that secrecy is a necessary tool of government on the executive level. When asked to appear before the 9/11 Commission, Bush and Cheney called the shots, avoiding public testimony by meeting with Senators in private at the Oval Office.

A point to make here is that Dean has no real inside information; most, if not all, of his sources are previously published articles and documents that can be easily found on the Internet. As a consequence, much of Dean’s constant admonishments and evidence of stealth activity will merely point out the obvious past for those who have followed current events closely. Still, Dean makes a compelling case against the Bush-Cheney White House simply by organizing the facts and the buried storylines that expose their hidden agendas. Of course, it’s sad that so few Americans bother doing this for themselves, content instead to ignore, rationalize, or passively consume the often overwhelming evidence of government corruption and greed. Hopefully, Dean’s Worse than Watergate can serve as a handbook for those who have not been concerned enough with the health of our democracy to do something about it.