‘Justice Is Not Neutral’: Rutherford Institute Issues In-Depth Report of Most Significant Rulings From the U.S. Supreme Court’s 2017-2018 Term

The Rutherford Institute’s report, “Justice Is Not Neutral” 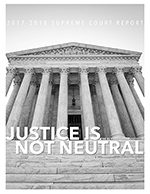 WASHINGTON, DC — In light of major changes taking place at the U.S. Supreme Court, The Rutherford Institute has released a new report that examines the significance of the Court’s most critical rulings handed down during its 2017-2018 term. “Justice Is Not Neutral” provides a detailed analysis of some the most critical rulings handed down within the past year, especially as they relate to First and Fourth Amendment rights.

“What a difference nine people can make. Given the turbulence of our age, with its police overreach, military training drills on American soil, domestic surveillance, SWAT team raids, asset forfeiture, wrongful convictions, profit-driven prisons, and corporate corruption, the need for a guardian of the people’s rights has never been greater,” said constitutional attorney John W. Whitehead, president of The Rutherford Institute and author of Battlefield America: The War on the American People. “America’s founders intended the courts within the American judicial system to serve as Courts of Justice. What we have been saddled with, however, are Courts of Order. This is true at all levels of the judiciary, but especially so in the highest court of the land, the U.S. Supreme Court, which is seemingly more concerned with establishing order and protecting government interests than with upholding the rights of the people enshrined in the U.S. Constitution.”

“Justice Is Not Neutral” examines the ramifications of the Supreme Court’s most consequential rulings from its 2017-18 term, especially as they relate to Speech, Religious Liberty and the First Amendment, Police Misconduct, Privacy and the Fourth Amendment, Immigration and the Power of the Presidency, States’ Rights, Voters’ Rights and Gerrymandering, and Commerce. As Whitehead points out in his introduction to the report, “We have come a long way from Justice William O. Douglas’ view that the Constitution—and, in turn, the Courts—are supposed to take the government off the backs of the people. For most Americans, justice remains out of reach, while the courts themselves remain out of sync with the spirit of the Constitution.”

For instance, in recent years, the Court has ruled that police officers can use lethal force in car chases without fear of lawsuits; police officers can stop cars based only on “anonymous” tips; Secret Service agents are not accountable for their actions, as long as they’re done in the name of security; citizens only have a right to remain silent if they assert it; police have free reign to use drug-sniffing dogs as “search warrants on leashes,” justifying any and all police searches of vehicles stopped on the roadside; police can forcibly take your DNA, whether or not you’ve been convicted of a crime; police can stop, search, question and profile citizens and non-citizens alike; police can subject Americans to strip searches, no matter the “offense”; police can break into homes without a warrant, even if it’s the wrong home; and it’s a crime to not identify yourself when a policeman asks your name.

The Rutherford Institute remains a consistent and persistent voice advocating for the rule of law and working to restore America’s judiciary to its rightful role as an institution that intervenes and protects “we the people” against the government and its agents when they overstep their bounds. As such, The Rutherford Institute’s report, “Justice Is Not Neutral,” along with its ongoing Constitutional Q&A series (also available at www.rutherford.org), is part of the Institute’s ongoing effort to educate the American people about their constitutional rights and to warn of the dangerous trends that threaten their freedoms. Deeply committed to protecting the constitutional liberties of every American and the integral human rights of all people, The Rutherford Institute strives to make justice accessible for all Americans by sounding the alarm over government misconduct and working in and out of the courts to make the government play by the rules of the Constitution.